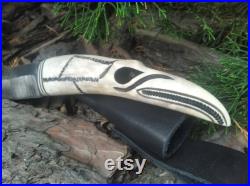 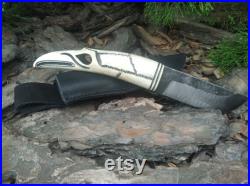 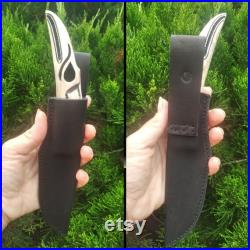 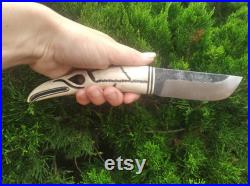 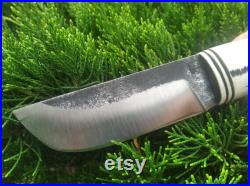 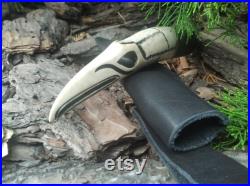 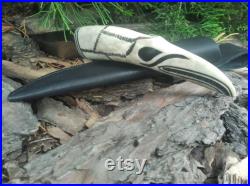 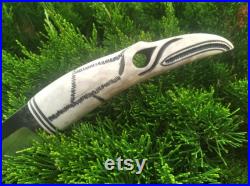 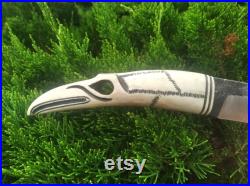 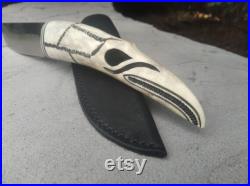 Exclusive handmade knife in scandinavian style great for everyday use. Steel viking knife with raven handle. The knife blade is made of carbon steel d2. D2 – refers to steels with a high content of elements such as chromium and carbon, which gives it excellent cutting properties, relative corrosion resistance and the required toughness. Wonderful work in your collection and a unique gift. It can be used in camping, bushcraft, survival, hunting, fishing, etc. The handle of the knife is hand-carved from moose antlers. No animals were injured. In november – december, the moose sheds its old horns. In april – may, the animals begin to grow new horns. We find them in the forest, process and make unique things for you. The total length of the knife is 23.5 cm (9,3 inches). The total length of the blade is about 10 cm (3.9 inches). All of the norse gods are complex in their powers. None is responsible for just one thing, and there is significant overlap between the different gods. Odin’s sphere of activity is particularly broad. He was the god of war, wisdom, poetry, death, the runes and magic. Odin is described as a mature wise man wearing a hat and cloak and with a long beard. He has one eye, having sacrificed it for wisdom at mimir’s well, and carrying his spear gungnir. Odin had many other attributes, reflecting his complexity as a deity. The most constant companions of odin were the ravens whose names respectively were huginn and muninn. These two ravens were let to fly out to observe the nine worlds and returned to asgard to tell odin what they had witnessed. They perched on odin’s shoulders and whispered into his ears what they saw. Maybe because of this, ravens became the symbol of odin’s thought and mental power. They also became one of the most respected creatures in norse mythology. This item is made of moose antlers and carbon steel d2.